A St. Paul man was charged with multiple offenses after leading police on a high-speed chase through a Redwood Falls residential neighborhood Friday afternoon.

On Friday, Sept. 27, at about 4:36 p.m., the Redwood Falls Police Department was called to Tersteeg’s Grocery Store in Redwood Falls on a report of a fight in progress between a male and female near the gas pumps.

Before the police arrived, dispatch told the officers the male had entered a green 1998 Chevy Suburban. When officers arrived at Tersteeg’s they approached the green suburban to make contact with the male driver. The first officer on scene recognized the driver from prior contacts as Paul John Belmares, age 34, from South St. Paul.

Belmares drove from the scene despite officer’s orders to stop, then left Tersteeg’s at high speed. Officers followed with their red lights and sirens activated. 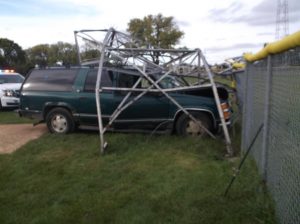 Belmares ran a red light at the intersection of Bridge and Dekalb Streets, almost colliding with another car, then drove eastbound with officers in pursuit.

Belmares drove into the ditch on the south side of Bridge Street, where a juvenile was walking, continuing westbound on Bridge Street in the eastbound lane of traffic.

Belmares then entered a residential neighborhood. Officers continued to follow him as he drove down an alley on the east side of Memorial Park. In the alley Belmares drove through a chainlink fence near the ballpark, through the baseball park and then struck a light tower.

(Copyright © 2019 Southern Minnesota News – Alpha Media Mankato.  All rights reserved. This material may not be published, broadcast, rewritten or redistributed.)