(Mankato, MN) – A Facebook page has been created to send a plea to a local fast food restaurant to repair the pothole-plagued parking lot.

“Burger King Mankato Please Fix Your Parking Lot” was started in mid-May by an apparent frequent customer who became frustrated with navigating the difficult terrain of deep and numerous potholes at the Riverfront Drive restaurant.

“I enjoy going to this Burger King as it is the only one in town, but I would enjoy it more if the parking lot was not full of potholes,” reads the page’s “About” section.  Others obviously agreed with the page creator.  In its 45 days of existence, it has picked up nearly 3,000 followers. 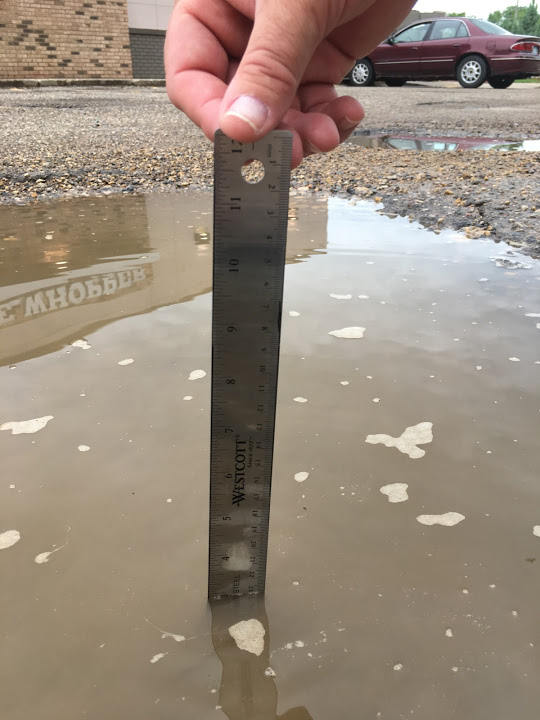 Just over a month after the page was created, a photo depicting a dubious solution to one of the more impressive potholes in the lot was posted, a solution, the page moderator said, was not viable.  The hole – pictured above – was filled with stone and encircled with brick.  “BURGER KING THIS IS NOT A SOLUTION,” reads the photo caption.

But to Cleo, a supervisor at the Mankato Burger King, the temporary fix was the best she could do with the resources she had.  “The bricks out there, I did that and [corporate is] well aware that I did it.  ‘Cause they were getting so deep, it scared me.  We had some extra brick over at the house, and people made jokes about it.  You know, I did it, I don’t care.  I admit it.  [The potholes] were just getting so deep.”

Cleo tells SMN that the Vice President of Operations and Vice President of Tri-City Foods, owner of the business, have visited, assessed the situation and deemed the repairs necessary.  Cleo says she had been sending the VP’s photos, but they didn’t realize the severity of the situation until the visited in person.  “All he could do to me the day he was here is apologize.”

It may be a bumpy and treacherous ride to your frozen Coke for the time being, but your vehicle’s suspension will be under assault for just a short time longer.

“It is a work in progress; I know they are trying to get it done soon.  It all depends on who they’re going to go with and how long before that company can do it,” said Cleo.

In the meantime, we suggest booking your mechanic in advance of making the perilous trek through the lot of 10,000 holes.

8 hours ago
Connect With Us Listen To Us On