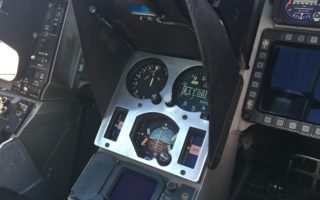 That’s how Major Whit Collins describes the F-16 fighter jet he’ll be flying this weekend in Mankato for the Minnesota Air Spectacular.

We’ll take his word for it.  Collins was raised around planes.  His father was maintenance officer for the Air Force and worked on F-16’s.  His grandfather flew planes in World War II and in Vietnam.   It was a natural progression that he get his pilots license in college and join the Air Force from there.

His passion for flying is evident as he rapidly fires off details about the sleek jet.  And he’s obviously proud of the Thunderbirds and the show that they’ll reveal to Mankato this weekend.

“It’s gonna be a great time.  It’s loud and exciting,” said Collins.  “We’re here to show the pride, precision, performance that every person in the Air Force has.”

That precision doesn’t come from a few leisurely flights.  Thunderbird pilots need 750 hours in an aircraft, according to Collins.  From there, they train from November until March, flying twice a day, which can be physically exhausting.  “I’d say by Friday, I’m pretty much mush,” says Collins.

But it’s all in the name of an epic show.

“You’ll see F-16’s that will be flying for about 45 minutes,” Collins describes.  “From there You’ll see anything from high-speed passes of guys going just under the speed of sound, so .94 mach, about 700 miles per hour.”

Watching the planes from the ground, the flight looks graceful and effortless, but Collins said it’s different from the air perspective.

“You’ll see all of us working as a team to maneuver the diamond and the delta and a series of loops and rolls, and we’ll change formations, and kind of demonstrate.  It looks very graceful from the ground, but it’s actually pretty violent in the air.  The moves are pretty precise, but they’re aggressive.”

Tickets for both Minnesota Air Spectacular are still on sale and can be purchased online.

(Copyright © 2019 Southern Minnesota News – Alpha Media. All rights reserved. This material may not be published, broadcast, rewritten or redistributed.)

On the heels of announcing his next album, Chris Young drops fan-favorite, “Rescue Me”

“City of Music”: Brad Paisley shares a realistic glimpse into what it takes to make it as a country star

Reba McEntire denies rumors she’ll appear at a political fundraiser: “I do not get involved in politics”