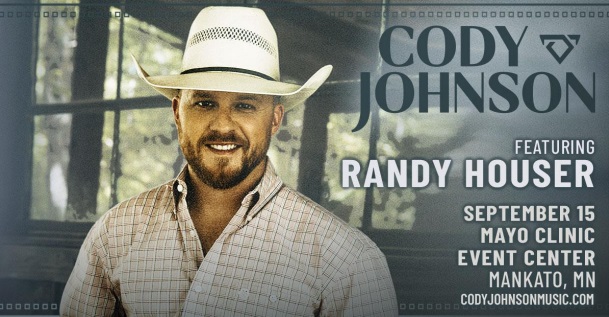 Mankato, MN…COJO Music/Warner Music Nashville country powerhouse, Cody Johnson has just announced 23
new dates for the final part of 2022, including what is sure to be a sold-out show in Mankato, MN. Cody Johnson,
along with country music mainstay, Randy Houser, will be tearing up the stage at Mayo Clinic Health Systems Event
Center on Thursday, September 15

Mayo Clinic Health Systems Box Office.
Cody Johnson is releasing the title track off his sophomore major-label release Human The Double Album to country
radio next month, impacting June 6. “Human,” written by Tony Lane and Travis Meadow, was triumphed by Bob
Oermann in Music Row, “I didn’t think it was possible to follow a perfect performance like “Til You Can’t”, but this
(“Human”) stunning meditation on frailty and mistakes is just as breathtaking. This man is dusted with the glitter of
superstardom.” Billboard praised it as a“gut-punch, heart-on-your-sleeve vulnerability” and People Magazine said the
song is “a vulnerable ballad about mistakes and forgiveness.” “Human” is the second single to be released off the 18-
song project following the highly successful two-week #1 hit “’Til You Can’t.”

17 hours ago
Connect With Us Listen To Us On