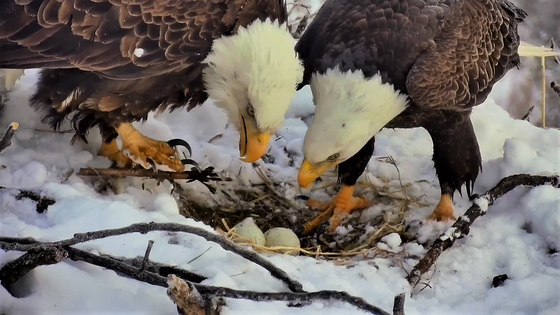 (St. Paul, MN) – A record number of viewers are watching a pair of bald eagles on the Minnesota Department of Natural Resources EagleCam.

The young pair are caring for three eggs in the nest, according to the DNR.  The EagleCam, now in its eighth year, streams live video from a Twin Cities bald eagle nest.

The DNR shared a video on social media Thursday afternoon showing the arrival of the third egg:

“People are excited about seeing and hearing this young eagle pair on the EagleCam as they try to nurture their eggs to eaglets in March,” said DNR Nongame Wildlife information officer Lori Naumann.

The EagleCam is one way that the Nongame Wildlife Program helps wildlife species, focusing on animals that aren’t hunted, such as eagles, loons, turtles, and butterflies.  Many of the species are rare and vulnerable to decline.

Over its 43-years, the program has played an important role in the recovery of bald eagles, trumpeter swans, eastern bluebirds, peregrine falcons, and more species.

**The DNR announced the arrival of a 3rd egg as this article was being written.  The headline and details have been changed from the original article to reflect the event.